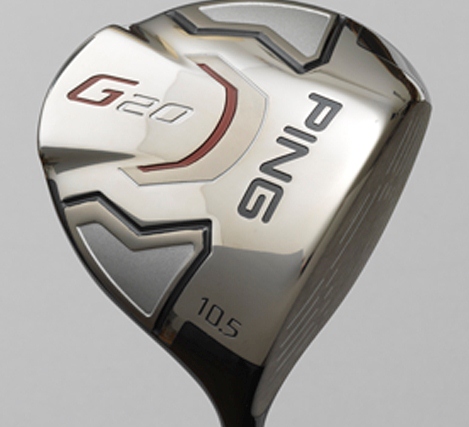 The newest addition to Ping’s line of game improvement drivers is the Ping G20. The Ping G20 Driver builds on the technology developed to enhance mid to high handicappers ability to hit it farther and straight in the Ping G15 Driver.

What Does The G20 Do Better?

The G20 is built with a titanium alloy that is lighter than most drivers, yet it is heavier than the G15. I am a little perplexed to see them go heavier, when lighter seems to be the solution of most club companies looking to increase distance.

On top of that, Ping took the shaping of the G15 and made it better in the G20. There is more weight towards the back of the club, and a lower center of gravity. These two shifts create a higher launch and lower spin right than its G15 predecessor.

A driver head reacts at impact by bending, or flexing. This impacts the overall sound and feel of the club, as well as how the ball comes off the club. With the Ping G20, calculated measures have been taken to make sure the ball comes off solid and online. They have adjusted the curvatures of the crown and sole to withstand the somewhat violent impact of a full on driver swing.

When the G15 and G20 were tested side by side, the G20 did in fact produce a higher launch and lower spin rate. So while most companies boast this enhance performance, the Ping G20 has real hard data to prove it can help mid to high handicaps hit it farther and straighter.

Ping drivers have been flying under the radar for some time, mainly due to Taylormades campaign to get every single player on the planet to play their clubs, regardless of who they are. With that being said, the Ping G20 CONTINUES the proven trend of new technology and enhance performance in an overall underrated line of drivers. With the upcoming public release of the G20 in August, I’m excited to see their complete 20 series of new drivers.