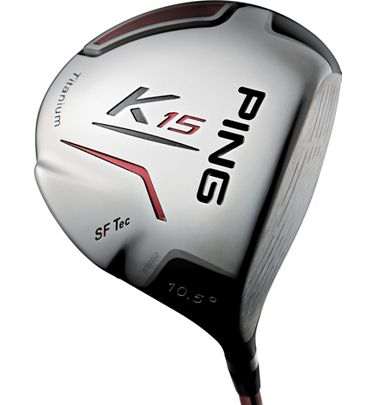 Ping’s take on “straighter” comes with a redistribution of weight that intends to increase club face stability on mishits.

The Ping K15 Driver uses what Ping calls “Straight Flight” Technology, or SF Tec. SF Tec is a redistribution of weight so that 10% of it resides on the heel of the club. It is a bit surprising to see ping go this route considering other major brands are jumping on the “adjustment screws” bandwagon. This is especially surprising when we consider that SF Tec basically indicates their belief in the effectiveness of weight redistribution on the ball flight.

The Ping K15 driver rounded out Ping’s “15” series of drivers with a club made specifically for high handicappers fighting a slice, or “power fade.” The added weight on the heel keeps the club more square on left of center hits. This in turn reduces cut spin and ultimately reduces the left to right flight of the ball.

Other clubs have some sort of “SF Tec” available through the use of adjustable screws, and it seems Ping’s choice is a bit behind the times. However, I can’t blame Ping for releasing a game improvement driver specifically tailored to “cutters.” It is the miss of “choice” to an overwhelming majority of players.

There is more to this driver than just the “SF Tec.” There was weight removed from the crown of the club head. A thinner, lighter crown was created to enahance the forgiveness of the driver by creating a lower center of gravity. A lower center of gravity will increase the launch angle, and allow the ball to carry further. There is a bit of high launch, low spin built into the Ping K15 marketing message, but what driver isn’t claiming that these days? 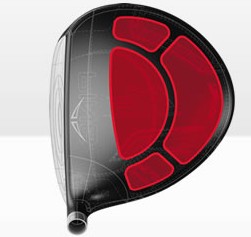 There is little question that this club is built for players that want to STOP hitting it left to right. This is most evident in Ping’s decision to do everything but set the club face closed.

One disappointment I found with the Ping K15 was the lack of shaft options. This is possibly another indication of who this club is for. High handicappers rarely concern themselves with the shaft they’re using, beyond its flex. I would guess its a move to simplify the decision for players, and I can’t argue with that.

The driver produces a muted sound that might leave players desiring a little more. Couple that with a less than spectacular appearance and the aesthetics of the club don’t do a very good job selling it. More players than not have negatively commented on the crowns design and how the SF Tec looks at address. You can actually see the SF Tec bulge underneath the heel at address.

In all the Ping K15 driver has been put together with the average player in mind. If you are the type of player that wants a club that reduces the tendency to hit it left to right, this club is absolutely a good fit for you.

If you’re a lower handicap that demands a bit more out of your driver, the Ping K15 shouldn’t be on your radar. There are however, two other drivers in the Ping 15 series, the I15 and G15 that may be more suitable to your game.